Diphtheria is caused by the release of a toxin from the bacteria Corynebacterium diphtheria.  The toxin can cause myocarditis and paralysis of the soft palate.

There are several strains of C. diphtheria; most strains do not produce the disease causing toxin.

Only when the specific disease causing strain of bacteria has been infected by a specific virus, called a B phage, will the bacteria be able to produce the toxin. 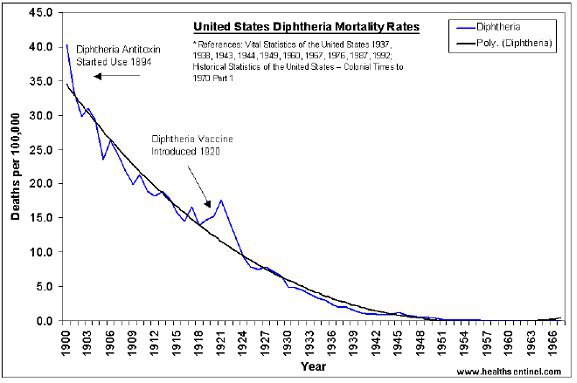 Between 1900 and 1920 the mortality rate from diphtheria declined by 50% before the widespread use of diphtheria vaccine.

Incidence of Diphtheria in the U.S.:

The vaccine for Diphtheria was introduced in 1920, but widespread use of the toxoid did not begin until 1948.

Since C. Diphtheria is a bacterium, it is treatable with antibiotics, and it is sensitive to the most commonly prescribed antibiotics.  Widespread use of antibiotics began in the 1950’s.