There has been mass hysteria in the media lately over a few cases of measles in Disneyland.  However, measles has historically been a common childhood disease with rare complications.  It is also known as Rubeola or 9-day measles.

Symptoms typically begin with cough, coryza and conjunctivitis.  Rash begins 3-5 days later, starting on the side of the neck and then spreading over entire body.

In healthy, well-nourished children, measles has low mortality and no complications. 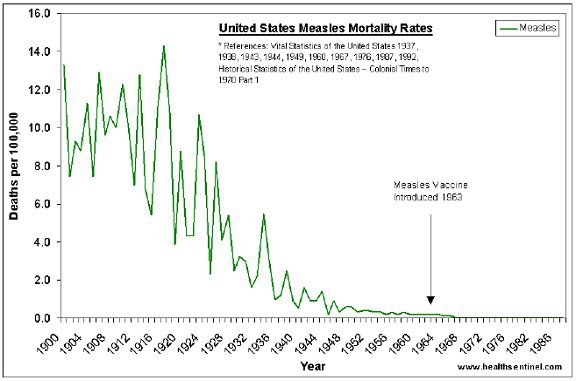 From the above graph we can see that the measles vaccine had little effect on the ability for children to increasingly survive from the measles as the mortality rate had already steeply declined before the vaccine was introduced.

The vaccine has had an impact on the disease rate of the measles, as shown in the graph below.  Therefore there is a concern that if parents do not continue to have their children vaccinated, that the disease will make a comeback. 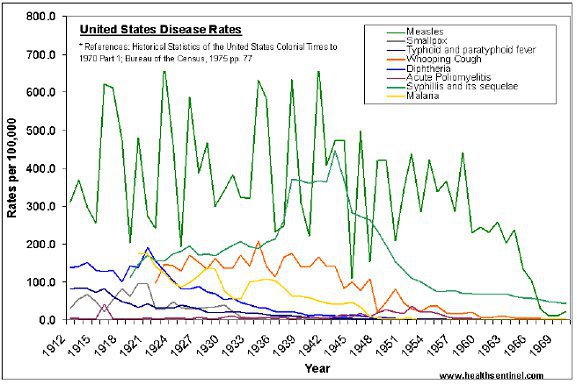 However, what is the price we are paying for not having to deal with the measles?  The article below raises one of the concerns.

Measles May Protect Kids against Allergies – Study finds that vaccinated kids were more likely to have allergies.
http://pediatrics.aappublications.org/cgi/content/abstract/123/3/771?eaf

Perhaps there is a reason why children are supposed to get the measles, and instead of looking to eliminate it, we should be looking at how we can increase the level of health of our children, and learn how to better care for them when they do get the measles, helping them to come out on the other end of it healthier and stronger.

The following link gives an excellent perspective on the measles and how we can better help children through it.
http://thinktwice.com/measles.htm