Influenza is a respiratory infection in which symptoms include: fever, chills, myalgia, sore throat and cough.  Symptoms can last a week or more.

The elderly and immunocompromised are most at risk from complications of the flu.

The flu is specifically caused by a virus in the influenza family.

Every year, federal health agency officials try to guess which three flu strains are most likely to be prevalent in the U.S. the following year to determine which strains will be included in next year's flu vaccine.

However, sometimes health officials do not correctly predict which flu strains will be most prevalent and the vaccine's effectiveness is much lower for that year.

In addition, the CDC states:  The majority of “influenza-like illnesses” (ILI) are not caused by a virus from the influenza family but by other viruses. (e.g. rhinoviruses, adenoviruses, and parainfluenza viruses or by bacteria such as mycoplasma or Streptococcus.

The vaccine does not prevent ILI caused by the other infectious agents.  Therefore, “many persons vaccinated with the flu vaccine can still get the flu.”

Therefore there has been limited if any benefit from the flu vaccine in reducing the flu.
http://www.pulsetoday.co.uk/story.asp?sectioncode=23&storycode=4120814

This last point is crucial.  Normally if someone contracts influenza they will exhibit symptoms of the disease and know to stay away from other people.  However, if someone is vaccinated for influenza, and they actually contract one of the strains of influenza in the vaccine and the vaccine works at preventing the symptoms of the flu, they will not know to keep away from other people.  So instead of the vaccine "protecting" those who can't be vaccinated like infants, it actually poses a greater risk.

One of the reasons the CDC has pushed the flu vaccine is to prevent deaths from the flu, in which they claim there are over 36,000 deaths per year from the illness.

However, this statistic has come into question, as noted in Peter Doshi’s article “Are US Flu death figures more PR than science?”in the British Medical Journal.

In a written statement, CDC media relations responded to the diverse statistics: "Typically, influenza causes death when the infection leads to severe medical complications." And as most such cases "are never tested for virus infection”...CDC considers these [NCHS] figures to be a very substantial undercounting of the true number of deaths from influenza. Therefore, the CDC uses indirect modeling methods to estimate the number of deaths associated with influenza."

CDC's model calculated an average annual 36 155 deaths from influenza associated underlying respiratory and circulatory causes (JAMA 2003; 289: 179-86[Abstract/Free Full Text]). Less than a quarter of these (8097) were described as flu or flu associated underlying pneumonia deaths. Thus the much publicized figure of 36,000 is not an estimate of yearly flu deaths, as widely reported in both the lay and scientific press, but an estimate—generated by a model—of flu-associated death.

And even if we combine deaths from influenza and pneumonia, the rate of death from these diseases has been on the decline throughout the 1900s (except for the blip in 1918) and been steady since the 1950s. 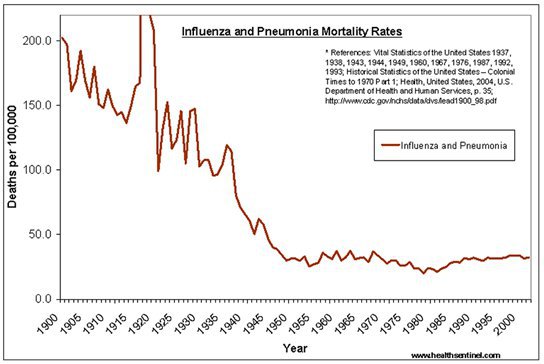 What then leveled off the death rate in the 1950s? Penicillin, an antibiotic for pneumonia, which became available to the general population after WWII.    http://204.193.8.79/Social%20Sciences/Wasserman/Study%20Aids/PDFs/Imported%2010-12-09/PENICILLIN_and_WWII.pdf

In addition, the influenza pandemic of 1918, which killed between 50 million and 100 million people globally in the course of 18 months has been used an example of why we need the flu vaccine and to be ready for the next pandemic.  However, recent research has found that most of the deaths in the pandemic may be attributed to strep infections and not the flu virus itself.
http://www.reuters.com/article/scienceNews/idUSTRE5146PD20090205?feedType=RSS&feedName=scienceNews&sp=true

And does the flu vaccine actually help decrease deaths due to the flu? According to an article posted March 2, 2009 in JAMA, “Influenza resistance in the United States is on the rise, along with attendant morbidity and mortality.”
http://www.medscape.com/viewarticle/588910?src=mp&spon=17&uac=103303SJ

Further studies are showing that the flu shot does not reduce the risk of death.  In a study appearing in the first issue for September 2008 of the American Journal of Respiratory and Critical Care Medicine, researchers from Alberta found:

"While such a reduction in all-cause mortality would have been impressive, these mortality benefits are likely implausible. Previous studies were likely measuring a benefit not directly attributable to the vaccine itself, but something specific to the individuals who were vaccinated - a healthy-user benefit or frailty bias," said Dean T. Eurich,Ph.D. clinical epidemiologist and assistant professor at the School of Public Health at the University of Alberta. "Over the last two decades in the United Sates, even while vaccination rates among the elderly have increased from 15 to 65 percent, there has been no commensurate decrease in hospital admissions or all-cause mortality. Further, only about 10 percent of winter-time deaths in the United States are attributable to influenza, thus to suggest that the vaccine can reduce 50 percent of deaths from all causes is implausible in our opinion."

The CDC is now recommending that pregnant women receive the flu shot to protect their newborn, since the flu vaccine cannot be given to a child younger than 6 months of age.

This recommendation is given despite the warnings given in the product inserts for Fluzone and FluMist (see Flu Vaccine under Vaccines) that it is not known the effects of the vaccines on the developing baby or on fertility.

A recent study in the New England Journal of Medicine (NEJM) touts the effectiveness of the flu vaccine in protecting a newborn baby from the flu.
http://content.nejm.org/cgi/content/full/359/15/1555

This study is being used to push forward the program of having pregnant moms to be vaccinated to protect their baby.

One of the key reasons the CDC pushes the flu vaccine is because of the serious complications that can arise from getting the flu.  However, the study in the NEJM only showed effectiveness in reducing influenza illness and rates of respiratory illness with fever in infants and mothers.

It was stated “Our study did not have statistical power to assess the infrequent outcomes of influenza, including hospitalization and severe illness.” (Emphasis mine)

In addition, in the Supplementary Appendix to the NEJM study it was stated “There were no statistical differences in the numbers of death or hospitalizations between the 2 vaccine groups.  These observed rates of maternal, neonatal and infant mortality are not significantly different from national Bangladesh rates.”
http://content.nejm.org/cgi/data/NEJMoa0708630/DC1/1

Furthermore, a study done in the American Journal of Perinatology did look at hospitalizations and outpatient visits, and found no difference in the risk for vaccinated and unvaccinated women.      http://www.safeminds.org/protect-yourself/fludocuments/Black%20Preg%20Flu%20Vax.pdf

Authors of this study did state that “It is important to note that power is limited in this study because the absolute rates of hospitalization for infants and mothers were very low.”

However, they went on to say “It is this very low burden of disease in our population that not only limits the statistical power of this study but also limits the potential impact of an influenza vaccine program in pregnant women. Although one might argue that the apparent lack of vaccine efficacy could be that women were vaccinated because they were at higher risk of disease and that the two groups are not comparable, the fact remains that the absolute disease risk in either group was extremely low. Therefore, although a larger study may demonstrate effect, the absolute potential public health impact of prenatal influenza immunization, on the basis of disease burden in our population, is limited.” (Emphasis mine)